What Are You Doing to Stay Sane.... 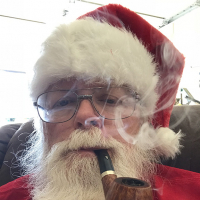 PappyJoe Master
March 21 in General
In a world where everyone is telling you to "shelter-in-place" or self-quarantine. (For the record, "shelter-in-place" should only be used during times of potential immediate destruction, like a tornado or earthquake.)

We are all victims to the Coronavirus. Whether we actually have it, know someone who has it, or just based on all the restrictions placed on businesses. The Coronavirus is real and the smart thing to do is to stay at home except when absolutely necessary. The reason we have government officials making the proclamations about the dangers and forcing people to be unemployed is because the Coronavirus is serious and people are too stupid to take the proper precautions.

That being said, "What are you doing to stay sane?"

The advantage of being 67 years old and semi-retired, is that I have found numerous things to keep myself busy. I tend to buy physical books (the kind you can hold in your hands, not ones about doing physicals.). I have probably close to 100 books stashed around the house. Starting today, I am going to read the works of Tolkien, beginning with the Hobbit.

I have hobbies, too. I am still working on restoring a box of estate pipes for a lady. I work on two or three per day and so far, I've completed eight pipes.
I also took up leather crafting last year, in order to make accessories for my seasonal appearance as Santa Claus. I have a supply of leather and tools for working on.

And, I have my pipes and enough pipe tobacco to last for at least five years. I have gone from smoking one bowl a day to being a two bowl a day smoker.

Finally, there is the internet where I can defeat boredom for short periods of time but logging into forums and venting.